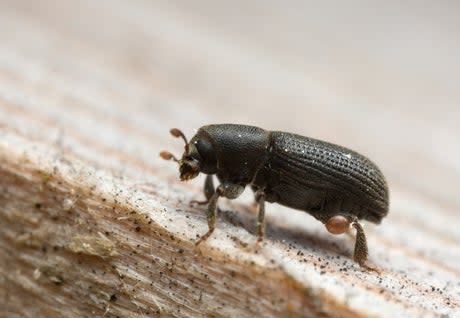 Bark beetles (Getty Images/iStockphoto) are a pest for trees.

In the last four decades, European forests have been more vulnerable to insect pest outbreaks, recent study has shown.

It indicates that there has been no improvement over the past four decades in the susceptibility of forests to fires and "windthrows" - where trees are planted by strong winds.

However, the vulnerability of forests to insect pests has increased "significantly," particularly as scientists claim after 2000.

The study published in Nature Communications notes that the increase "appears to a great extent driven by the rise in temperature in Europe."

Study lead author Giovanni Forzieri, a scientist at the European Commission Joint Research Centre, told The Independent that "we found that the susceptibility to insect outbreaks, particularly in the rapidly warming forests found in northern parts of Scandinavia and Northern Russian Federation, grew during this time.

"The vulnerability of these regions increased by about 2 percent per decade."

"Insects could lead to significant reductions in [plant growth] and ultimately to high tree mortality throughout the country," Dr Forzieri said.

"These insects may be low or endemic for several years.

But their populations will expand to dangerous levels when conditions benefit them."

The research fails to analyze why temperature changes could increase the susceptibility of forests to insect pesticides, but an earlier analysis published in Science showed that global warming will improve the behavior of insect pests through the increased ingestion and reproduction of both.

This current study analyzes both spatial and temporal shifts in the susceptibility of forests to climate-related distress from 1979 to 2018, including insect pest outbreaks, fires and wind turbines.

The "vulnerability of the forest" is an indicator of how serious a forest is when disturbance occurs, said Dr Forzieri.

"Therefore, the lack of a clear signal for a change in fire and wind vulnerability does not imply any change in such disturbances," he added.

"The absence of a vulnerability trend indicates instead that the 'susceptibility' of forests to such disturbances is not or limited."

"The Iberian Peninsula, Italy, Southern France and parts of Belarus and Ukraine show significant positive trends for vulnerability to fires that are associated with an increase in water stress," he said.

"In the Balkan countries and parts of Portugal and Norway, positive trends in wind vulnerability are evident - following increase in precipitation, snowfall and the speed of the wind."

A survey by the Science Brief review group with more than 100 scientific reports concluded that global wildfire risks are growing due to rising temperatures and evolving precipitation trends.